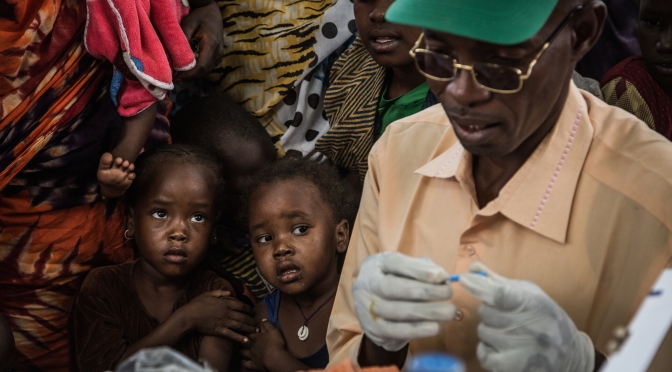 N’DJAMENA, February 27, 2017. Ahmad’s father smiles sadly while he tries to make his little boy stand still so that the nurse can give him a dose of trivalent meningitis vaccine.

“My son is afraid of the needle, but he will realize in a minute that it is nothing,” he says. ”I lost my younger sister two weeks ago. By no means do I want my son to suffer as she did.”

In 2011, a new meningitis outbreak was declared in Chad. In response the introduction of the new vaccine MenAfriVac, managed to dramatically reduce the impact of this terrible disease, saving many children lives. 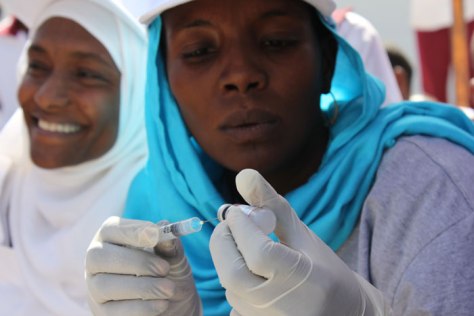 With the support of GAVI Alliance, the organization of four immunization phases covering the entire country resulted in the vaccination of 8,686,026 individuals. Since December 2012, there have been no cases of meningitis type A reported nationwide.

Toma Mamout, a community outreach volunteer, speaks to mothers about the importance of the meningitis vaccine. In nearby villages, she talks on vaccinations, basic hygiene and the use of mosquito nets to prevent malaria. “We advise mothers to bring their children to every vaccination drive and to stick to the calendar,” she says. 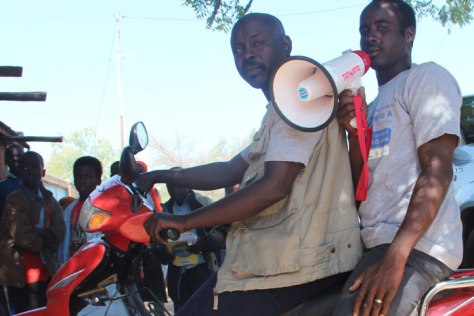 Sensitization campaigns were organized at the community level to raise awareness about immunization activities and its importance to the population. As the vaccination campaign continued, social mobilization activities were conducted to inform the population about immunization and the risks of meningitis transmission. Local radio stations, social centres and religious and community leaders have been also engaged in outreach activities.

Radio is also essential to these efforts, reaching far more people than any other media in Chad. “Broadcasts and advertisements get people ready for the vaccination campaigns. Families quickly understand the need to vaccinate their children,” mentions Editor in Chief of the community radio station in Mongo Djimet Khamis Zaouri.

Meningococcal meningitis is an inflammation of the protective membranes covering the central nervous system. While some forms are mild, it is a potentially serious condition owing to the proximity of the inflammation to the brain and spinal cord. Meningitis can lead to brain damage, deafness or death if untreated.

Vaccination is an effective, low-cost public health intervention that significantly reduces infant mortality. Nevertheless, in Chad, the percentage of children fully immunized during their first year of life is estimated at 25%.

UNICEF’s future efforts will focus on surveillance, evaluation and promotion of immunization efforts, continue support for the ongoing preparation of the introduction of Meningitis vaccine in routine immunization in 2017, of thus providing critical continued support to the fight against meningitis