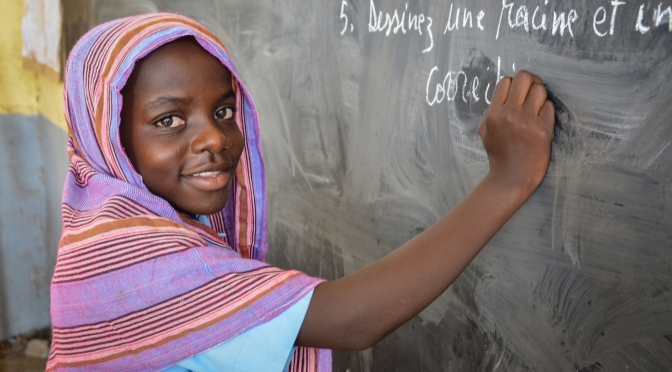 “I believe girls and boys can equally succeed in school. We have women ministers, lawyers and doctors? Why not me?” Ashta Saleh lives in Gadjira near Mongo in Central Chad. This bright 12-years old girl aspires to a better future for herself and her community. « Traditionally, we are herders and farmers. Nobody around me has ever been school. I would like to be the first educated girl in the family, » she says. « I hope to continue my studies up to university to become and educated woman”.

“For my family, schooling is important, even for a girl. If I was not going to school, I would get bored. Some of my neighbors don’t go to school. They think it’s too late for them. I think that we should not miss the opportunity to learn,” Ashta said before entering class again.

The Gadjira public school got a fresh boost thanks to the Project of Revitalizing Basic Education in Chad (PREBAT) supported by the Global Partnership for Education. « Before the construction of the new classrooms, we used to seat on the floor in huts built of straw. After every windstorm, we had to repair them. Worse, during dry season, cows and goats used to disturb us as they were eating the straw of the school huts. We had to chase them ourselves, » says Ashta, smiling.

”In my school, the construction of two new classrooms and the distribution of learning materials prompted parents to massively enroll children. We passed from 240 to 350 children in one school year! There are still more boys than girls but we continue to raise awareness with the parents ,” Amita, Amdjibaye, headmaster of the Gadjira Public School.

In Chad, education can nourish young minds, expand horizons and break the cycle of poverty. Education empowers girls to seek better health care during pregnancy, in childbirth and during their children’s early years. The results are reflected in lower levels of under-five mortality, improved health-care practices and later marriage. Children – especially girls – born to educated mothers are more likely to attend school, resulting in a cycle of opportunity that extends across generations.

To overcome these challenges, the government, with the support of its partners including the Global Partnership for Education, is implementing a major program to strengthen basic education.