When the Taye school was first opened in 1929, a few straw huts were used as classrooms, but most of the classes were held on the ground under the large fig-tree which gives shade to this school of southern Chad.

The smiles on the face of Esther and Kaltouma leave no doubt about their complicity and friendship. Today, these two girls can study in new buildings constructed with sustainable materials. Kaltouma, 12, is a confident young girl. For her, the difference is clear: « Now we have new benches, latrines and even a water point to refresh ourselves. Since these new buildings, many girls have asked their parents to enroll in school. I made a lot of new friends this year. »

Esther, 12 also, describes her school before the renovation: « We studied under very difficult conditions in the past. We sat down under the trees, struck by the wind and the heat. The rainy season prevented us from finishing the school year normally.  »

“For the construction of these schools, we are trying to use environmentally friendly insulation materials that help keep the interior temperatures low. This is of paramount importance in a country like Chad, where the temperature can reach 50 ° C and where cutting wood has a devastating effect on the environment, » says Mario Bacigalupo, UNICEF Construction Specialist. 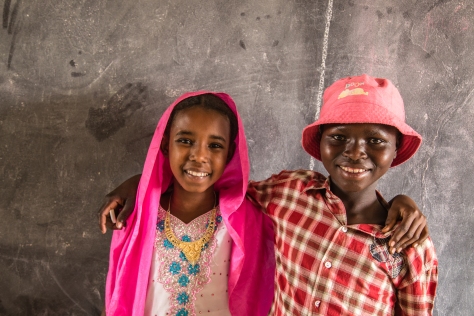 The classroom of Esther and Kaltouma is bright and spacious with large open windows. The lesson of the day has just been given on the big blackboard. It focuses on avoiding malaria. « The teacher has explained what malaria is and how to protect ourselves against this disease, » comments Esther.

Sitting on their new table-benches, Esther and Kaltouma are carefully taking notes and seem very motivated by this practical course given by Mr Beradingaogoto, the teacher at the Tayé school: « Nearly half of these pupils are girls. The new classrooms but also the latrines and water point really motivated the parents to enroll their daughters, « he says, proud to participate in this new boost for the education of Chad’s children.

For the two friends Kaltouma and Esther, studying under better conditions encourages them to stay as long as possible in school and allows them to aspire to a bright future. Both dream of being able to sustain themselves, help their families and contribute to the development of their communities.

« The Project to Revitalize Basic Education in Chad (PREBAT) has made it possible to enroll thousands of children in the school, to improve the quality of education through the training of community teachers and their textbooks. In addition, more than one million students in the preparatory courses of the 11 priority regions have benefited from school kits, « recalls Mr. Barragne-Bigot, UNICEF Representative in Chad during his speech on the occasion of the inauguration of the school.

Previously, the school depended mainly on the contribution of the community. Today, its renovation was part of the Project to Revitalize Basic Education in Chad (PREBAT) funded by the Global Education Partnership (GPE) and the Educating a Child Foundation (EAC).