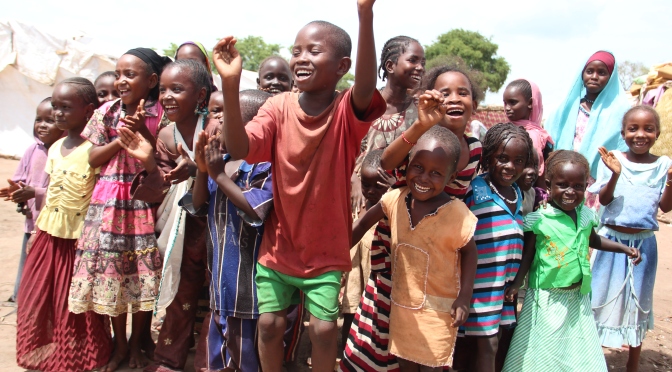 UPDATE: On the occasion of International Children’s Day, the European Union Humanitarian Aid and Civil Protection department (ECHO) organized a Google Hangout on Air, to highlight and discuss the “EU Children of Peace” projects to which UNICEF has been contributing for the past three years (Cameroon, Chad, Pakistan and Turkey). The Google Hangout, a live broadcast social media chat, connected nine ECHO partners from around the world who are implementing the EU Children of Peace project. UNICEF’s Chief of Education in Chad, Ms. Beatrice Wakimunu, took part, explaining what has been done in UNICEF’s EU Children of Peace project in Chad. Watch.

N’DJAMENA, Chad, 3 October 2014 – Last summer, I traveled with a UNICEF production team to Tédjou, a small town in eastern Chad with a mix of arid and green landscapes, in the region of Dar Sila.

Our objective was to talk with a group of parents in Tédjou about the Dance4Peace project, and to seek permission for their children to participate.

Initiated by the European Commission’s Humanitarian Aid and Civil Protection department (ECHO), as part of the EU Children of Peace initiative, the project invited children from conflict-affected countries around the world to take part in an original music video. The intention of the project was to draw attention to children as the most innocent – and often most affected – victims of conflict, and to allow children to share messages of peace.

In the case of the children of Tédjou, inter-communal clashes in the neighbouring region of Darfur in Sudan forced them to flee with their families in 2013. The town is home to some 50,000 Chadian returnees and Sudanese refugees.

An estimated 9,000 children here had to suspend their studies. Now they have the opportunity to return to school, thanks to the EU Children of Peace initiative, implemented by UNICEF with the support of ECHO, which provides conflict-affected children access to basic education and child-friendly spaces.

After presenting our project to the chief of the village, we were greeted by a group of teachers at the school centre, which was empty for the school holidays. We explained the how we would teach the Dance4Peace song and choreography to the children and how the filming would take place.

The Chief, Abdullah Hassan Ali, welcomed the idea, saying that it would allow the children of Tédjou to send messages of peace and love to other children of the world.
“This dance project for peace will let our town be known and our history experienced, as currently there are other parts of the world also experiencing war like we did,” he said. “That’s why we allow and encourage our children to participate actively, even though we are in a period of Ramadan.”

In the Chief´s courtyard, we met the students chosen for learning the Dance4Peace song and choreography. They were between 11 and 17 years old, girls and boys in equal number. It was their first time learning choreography, apart from the cultural dances of their land.

It was there where I met little Mouna Abdoulaye Arbab, a 12-year-old girl who attends second-year elementary school. Her teacher considered her one of the most timid girls in her class, as she did not speak much or participate in games with her classmates.

But the little girl in front of my eyes was far from timid. During the choreography, she was the one practicing harder, expressing herself openly, always facing the camera.

“I was encouraged by my mother to attend the Dance4Peace,” she said, smiling. “I’ve never danced this kind of music, but I like it. In the video you show us, I saw kids my age dancing, and it was beautiful.”

Mouna was among the first to rehearse the choreography for Dance for Peace during the filming. “I am very happy to dance with other girls of the village who are older than me. In the village, we rarely dance together girls and boys, but with Dance4Peace, for three days, we were all together and learning the same thing.”

The day after the shooting, we visited Mouna’s family. She lives in a hut made of mud and wooden sticks. When asked how she organizes her day, she replied without hesitation: “Since I’m on vacation, I wash the dishes and I take care of my two younger brothers while Mom is in the field. Soon, I will leave to return to school. I think that I’ll be a nurse to care for my parents when they are sick.”

To find out more about the EU’s Children of Peace project, visit: http://ec.europa.eu/echo/en/what/humanitarian-aid/children-of-peace 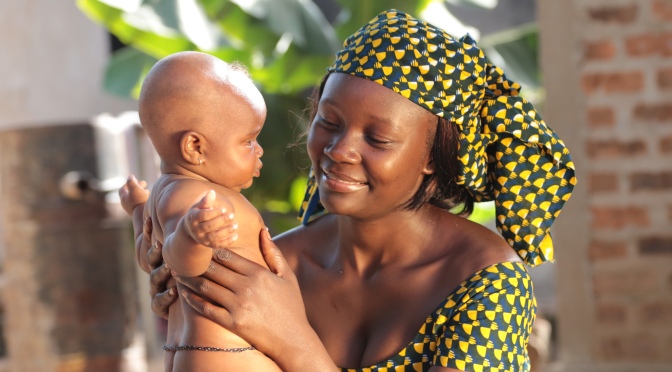 It is the 30th of October of 2014 and I am standing with a drone flying above my head, accompanied by three heavily armed military men, one United Nations security advisor, five international filmmakers, seven actors and a four-month-old baby called Patricia. Dozens of people are taking pictures with their cellphones…. I close my eyes and I ask to myself: how did I arrive here? I feel like I am on a film set in Los Angeles and a Hollywood cinematographer myself, but this is Moundou, southern Chad, and I work for UNICEF. The drone is actually filming a beautiful sunset scene; the military men are controlling the amused crowd; the security person is a colleague; and Patricia, the baby, is the main actress of the story.

So, what does this have to do with the work of UNICEF? Moundou is a beautiful sunny green town located about 400 kilometers south of Chad’s capital, N’Djamena. It was chosen for the filming of the music video produced by UNICEF Chad in collaboration with American electronic music duo ODESZA. The video aims to illuminate a critical step in achieving an AIDS-free generation: expanding access to HIV treatment for pregnant women. The song chosen was ODESZA´s “Sun Models” and its duo, Harrison Mills and Clayton Knight, were fully on board since the conception of the project. It is commonly known that music can inspire people. This project was born from this specific idea: if music is accompanied by a moving story, with a message of hope, the final product could be the catalyst to reach individuals, news media, political figures, the international community and donors to focus more on an issue.

A clear message: children born to HIV-positive mothers can be HIV-free The world has what is needed to eliminate the transmission of the virus from mother-to-child and achieve an AIDS-free generation. New HIV infections among children in high-income countries is virtually zero, but according to UNICEF´s 2014 Statistical Update on Children, Adolescents and AIDS, despite great progress, a child is born with HIV every two minutes. So what are we missing? Where are we failing? Why, in low-income countries such as Chad, is the prevalence of babies born HIV-positive so high? In the past few years, Chad has shown great commitment in the expansion of programmes that keep women living with HIV alive and effectively prevent mother-to-child transmission of HIV. The coverage in health facilities offering these services has tripled since 2012 and, as a result, more than two thousand babies were born free of HIV in 2013. However, 10,000 pregnant women living with HIV are still left without treatment and support in the country. END_OF_DOCUMENT_TOKEN_TO_BE_REPLACED